Dave Ramsey is one of our inspirations and a great financial coach. I fully believe in everything he teaches. One of the “novelties” that gets mentioned when talking about being debt free and living within your means is the “Dave car.” People say it in jest saying their “Dave” car might be the car that has smoke coming out the back end and dragging the front bumper.

I wanted to share with you my experience I had today. Every year, my wife and I go on a trip for our anniversary. Sometimes it’s four days in the next state, but this year it was a whopping 7-day, 3,000 mile road trip. We’re still getting out of debt, but we saved up for it all year long, and took some long needed vacation. My mother was kind enough to gift us a rental car for the trip. We went to the airport and picked up a 2015 Nissan Altima. This car was so nice and smooth, we thought we were going 10 mph slower than what it looked like and felt like. It had so much room, did everything we wanted, and even was not the worst sleeping arrangement on the trip (cushioned seats at a rest stop vs. hard, cold, and wet ground at a campsite).

Today, we had to return the car. Now, I consider myself a gentleman, and I drove that Nissan the whole trip: all sixty hours of driving. When I dropped it off, and went back to my little 2001 Dodge Stratus, I have to admit I was disappointed. The car was smaller. It was definitely slower and didn’t have the “giddy-up” power. The wheels probably need an alignment because the smooth blacktop felt rough. The glass will never be crystal clear no matter how many times you clean it. The visors are broken, the AC has to be on full blast for the whole trip home, and the ugly brown interior is just… ugly.

I was pretty shocked at how bad we had it. For a moment, I felt the pang of envy and the I-wish-I-had-that-new-car feeling. My wife has been dying to have a second car in the family so she can do stuff and take our three-year-old son out places instead of being cooped up in our duplex for week after week.

Then I remembered, we bought that car. I made my way down to a used car dealership, paid $2,000 of my hard earned paycheck dollars for a deal and drove away in OUR car. It was ours. I don’t have to send anyone else money to keep this car (except the county). I don’t have to rent it for $39 a day. I don’t have to pay $200 in interest a month. I don’t even have to pay a zero percent loan off. It’s ours. My wife says I might spend more in maintenance and repairs than it’s worth, but that’s okay. It’s ours. And that’s our first “Dave” car.

Maybe one day she’ll be driving that 2015 Nissan Altima, but for now, she gets chauffeured by me in our very own “Dave” car.

So I just read an article on huffingtonpost.com, and I am pleased to see someone making a stand against heels. Emma Thompson chucked her shoes at the Golden Globes last night (January 12th, 2014). She’s not the only one to … END_OF_DOCUMENT_TOKEN_TO_BE_REPLACED

Another reblog today. I agree with a lot of what this writer says. I do, however, would like to add that if an institution requires shoes, I may or may not challenge the institution’s requirements. It depends on the situation … END_OF_DOCUMENT_TOKEN_TO_BE_REPLACED

This is the first reblog that I am using, but I really like the content that I read from another site. I think the author has very succinctly phrased many of the key aspects of barefooting and the writing is … END_OF_DOCUMENT_TOKEN_TO_BE_REPLACED

What happens when you are in a business and a manager approaches you and is pretty downright rude? Well you take the capitalist approach and you take your business elsewhere. That’s what The Barefoot Wife and I had to do … END_OF_DOCUMENT_TOKEN_TO_BE_REPLACED

So I met a customer yesterday who was a blogger and reminded me that I need to blog. I brought up the conversation that I blog as well and the conversation turned to barefooting. Just briefly mentioning the legal ways … END_OF_DOCUMENT_TOKEN_TO_BE_REPLACED

I woke up this morning to a thunderstorm. It’s kind of rare for there to be storms in the morning where I live, and I thought it was nice. It was raining pretty hard, lightening every couple of seconds. A … END_OF_DOCUMENT_TOKEN_TO_BE_REPLACED

I was writing prettily on paper a short list of items. For those of you who don’t know, this is called calligraphy. To be more accurate, I wasn’t doing full blown calligraphy, just mimicking the strokes used with a regular … END_OF_DOCUMENT_TOKEN_TO_BE_REPLACED

Guess what? Our son is growing up.

He’s getting taller. He’s eating like a teenager. He is becoming braver when it comes to water and jumping on things. But tonight we had another milestone. 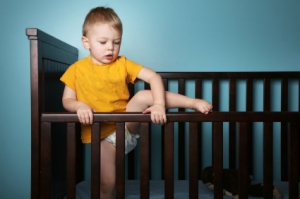 Tonight we transformed his crib into a toddler bed. We put up one of those rail things that attach and keep him from rolling out, but allows him to climb in and out of the bed. We decided now was a good time to do this because he was extending his leg above the original crib railing.

With this transformation we were worried that it would be a rough night on us, and for about the next month. Since he is no longer constrained to the bed, we were worried he would climb out and either cry or play with the toys in his room.

Well, today was the day. It was pretty normal. He took a nap and daddy went to work. I came home and then we changed the crib into the toddler bed. Then we took a bath and got ready for bed. Up the stairs, led and encouraged by us, he went. We got him to his room, and he noticed the completed new bed. He then climbed up into the bed. We finished dressing him in night clothes, laid him down and started his bedtime music, and left the room. 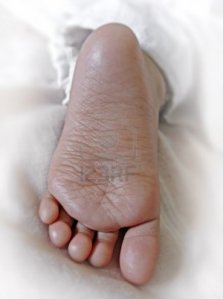 He cried for about eight minutes. Then all went quiet. We waited until about twenty or thirty minutes, not hearing any sounds or toys, then I went up to check on him. I opened the door, and what did I see? A little toddler laying down in his bed, blanket in his arms, with his barefeet sticking up towards me.

No headaches. No trouble. No worries. Our little man was fast asleep just like his normal self.

I only hope that raising him will continue to be this easy.